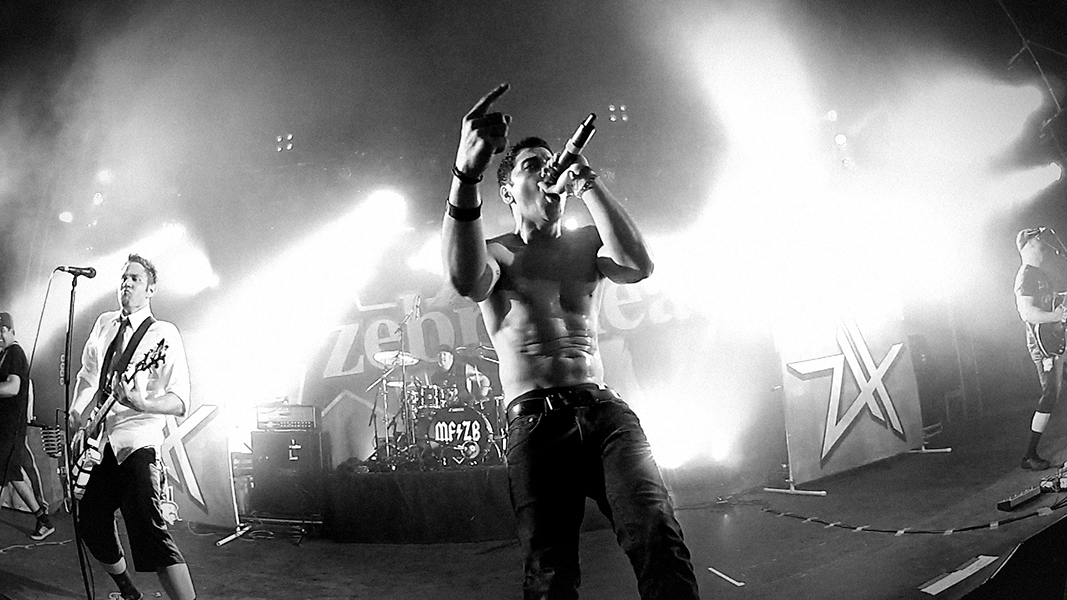 Blood loss and liver-gymnastics – The summer 2013 with Zebrahead

„Does it hurt?“ did the attractive girl ask me after we fell totally wasted in the bushes. I looked at the 10cm long cut on my chest and answered: „Dunno. I´m too drunk. But it doesn´t look good.“ My experience of pain was gone for that night, of which more later. At the beginning of 2013 the Zebrahead guys were busy recording their new album „Call your friends“, so the liver-gymnastics couldn´t start until August. On the festival list were Pukkelpop, Rock´n´Heim, Highfield and Chiemsee Rocks. Between the festivals we had club shows in Basel and Utrecht.

Pukkelpop is with about 190.000 people the biggest alternative festival in Belgium. Over 160 bands share 8 stages and 90.000 women (roughly). The line-up seems like a goulash recipe: Everything´s inside. To kill the time till the Zebrahead show we started a paper plane competition. Within a couple of minutes we destroyed the good reputation of German Engineering and the flying paper-scraps ended up on the next roof. After I successfully stalked Fall Out Boy, Eminem spitted some lines into the night sky. 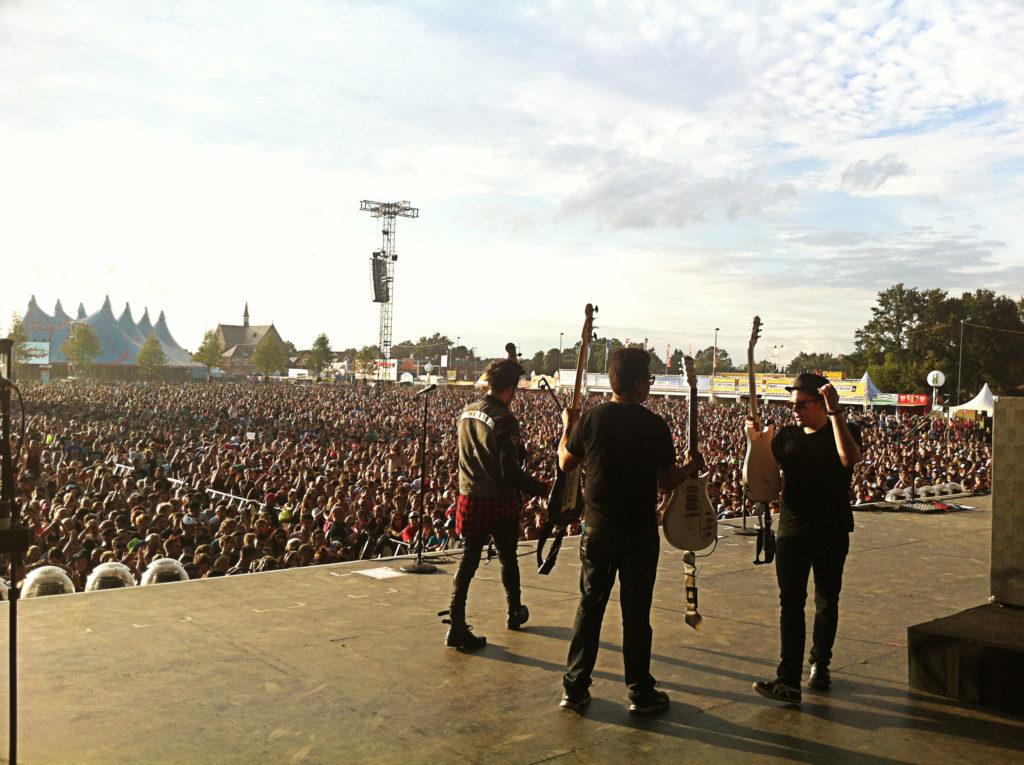 Marc, our tour-manager in his natural habitat: 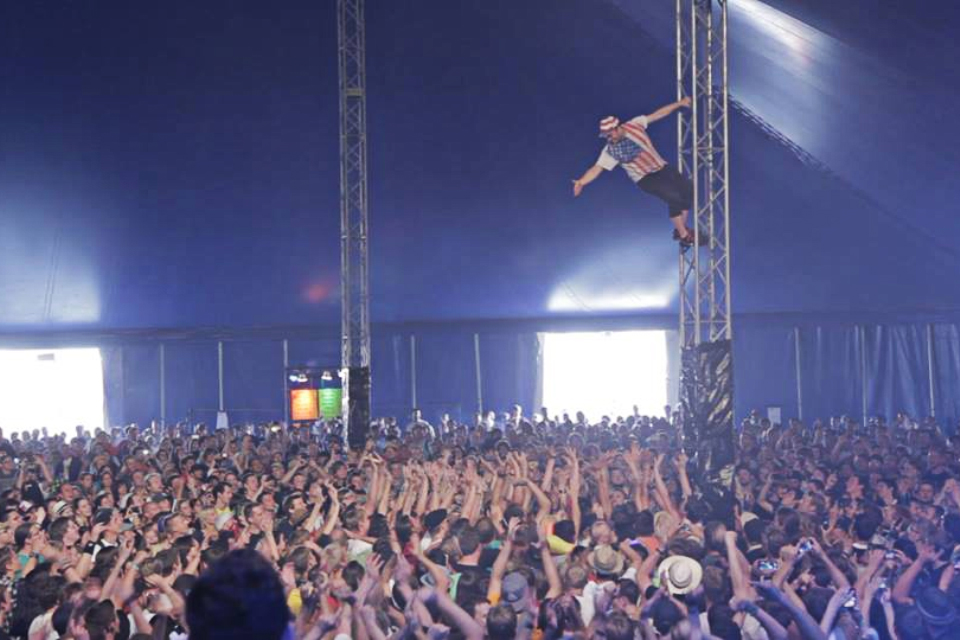 The next day Zebrahead made history at the German racetrack Hockenheim-Ring: The first time ever the Rock´n`Heim festival took place and they opened it! That’s pretty cool. The festival had all over the weekend about 40.000 visitors in three days. No street-walkers´ patch can keep up with that.

After the show a German TV channel filmed a guy on the stage who had to sing „My heart will go on“. In front of about 10.000 people. In a golden dress. His friend got a new TV for this. Fair tradeoff. However, we took care of the free Jägermeister at the backstage. During a nice sunset two gently dressed beauties offer you free Jägermeister mix drinks in the shadow of an artificial palm tree. We didn´t want to be rude and took the invitation. Logic consequence: The other events of that night blurred out to a memory-pulp, whose ingredients can´t be defined anymore.

The Highfield-Festival is also a little smaller, but still one of my favorites! 41 bands, 2 stages and about 23.000 visitors. The festival area is right next to the Störmthaler lake, which means that you can take a bath WITH the festival crowd after you took a bath IN the festival crowd. Confirmed by toxicologists: The lake only consist to 15% out of water. The remaining 85% are a an unhealthy mix of sweat, urine and alcohol. We didn´t care at all. It was summer. And I like the summer in Germany. It´s my favorite day of the year. And on such a nice day you can take a trip on a banana-boat. Bananas! As usual a picture in full laser HD: 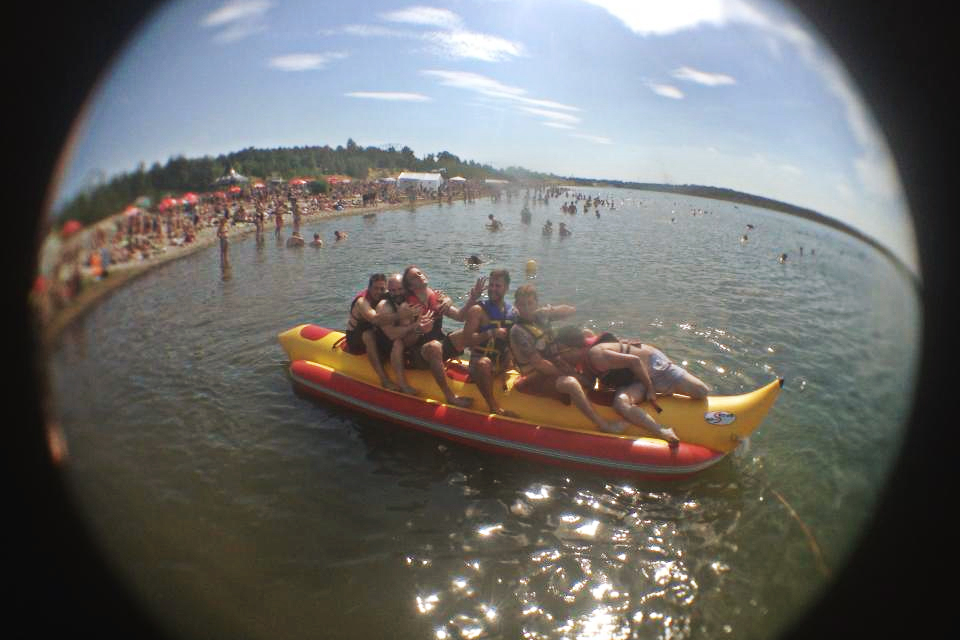 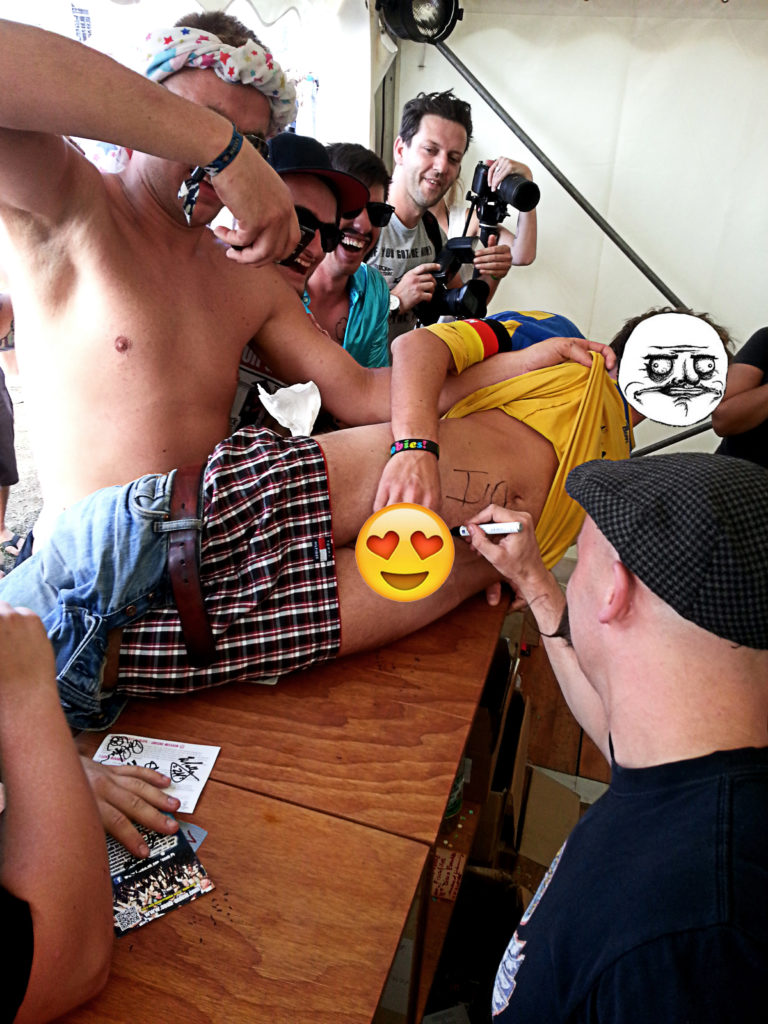 At the Chiemsee-Rocks were I don’t know how many ready-to-mate-visitors. I guess it were about 10.000. The best part was the ferries wheel, which we could use for free to get some video footage. I would like to thank the owners again. Pretty sure they will read it here. The night after the Zebrahead show we had a lack of cups. That never happened before. We needed one more so we decided to kill a cup of noodles and use the plastic cup as a cocktail glas. What a reincarnation! You die as an instant meal and then you get reborn as an alcohol bucket. Whatever.

In Basel, Switzerland I had my first work-day as a Merch-Guy. But can you really call it work? I mean you are traveling Europe with your friends, you get drunk and meet great people. You even get paid for that. Yes, it’s a job. But probably one of the best jobs ever. I totally felt comfortable in my new office. You can talk the whole night to cool people, you drink and you get introduced to beautiful girls. Nothing to complain.

As a service orientated Merch-Guy you take care of your customers even when the work is done. Sometimes I like to present chosen representatives of the female gender the internal drink menu. So called customer connectivity. After we inhaled that drink menu, we wanted to go to the bus to check out the mobile bar. But gravity had other plans with us. The physical force showed who the boss is and pulled us to the ground. But not without a detour through the earlier mentioned bush. I ripped my chest on big ass branch. Marc disinfected the cut with Wodka professionally and I taped it with Duck Tape. Shit happens. As you were. 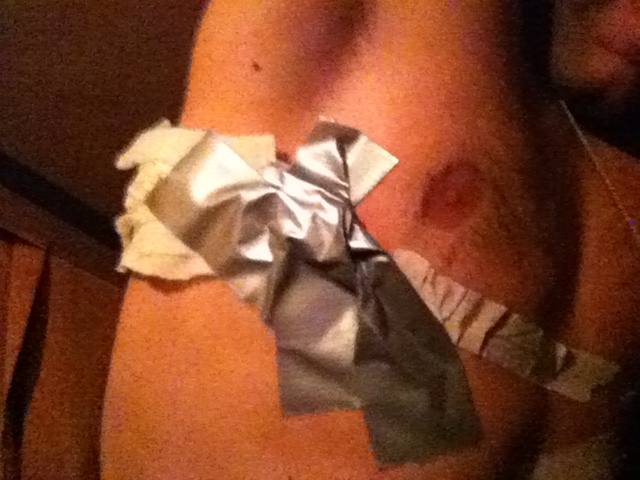 The scar still reminds me of the adventures of that night. If somebody asks me, where I got that scar, I just tell them that I jumped out of a helicopter on a burning snowboard while solving a math problem and I injured myself.

Between bushes and Wodka bottles Daniel and me had some time to grab the camera. During that trip we filmed for the video „I´m just here for the free beer.“ I hope this video summarizes a little bit the fun we had on this tour … Filmed and glued together by ChiliCake Films.

A tour like this is a total experience overload! So it´s pretty awesome to watch the footage and edit a video. All the memories came back. You forget way too much, cause so much happens in such a short time period …

Next time at snuckout: Can you still eat that? Why is everything so sticky? And what the hell means Zippsi?

Thank you @nickneuenhausphotography for catching

„Do you smell what I smell?“